Ashley and David are expecting! They both have families that live across the country, so instead of throwing a gender reveal party at their home, they filmed their stunt and hosted a Balloon Reveal Skype Party! 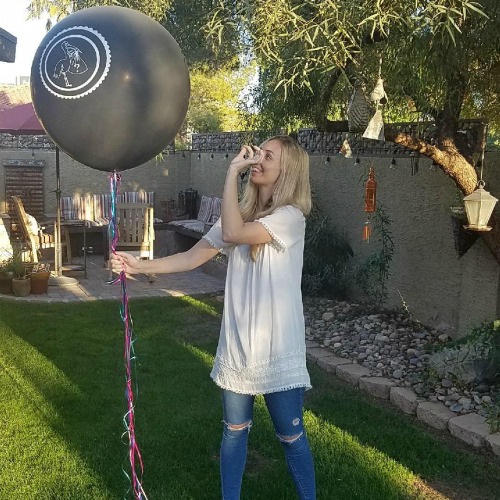 They chose the Gender Reveal Confetti Balloon because it’s super simple, easy to clean up and doesn’t require any special crafting skills. The kit includes a giant opaque black balloon and a packet of perfectly portioned confetti! Ashley got the confetti inside the balloon by using a paper roll hack as an easy fill assist! Check out this gif that shows the step-by-step process.

With confetti inside, Ashley visited a local party store to add helium (most shops charge between $5-$7 to fill balloons of this size). These giant balloons must be completely inflated to support the weight of the confetti and still float. Make sure the balloon shop tests it before you leave.  If it hovers low when fully filled, just shake it about to distribute the confetti evenly inside.

For filming the reveal, David was iPhone cameraman and Ashley was the momma-to-be-super-star! Their long-distance gender reveal party started once everyone got online, and all together received the reveal video in their inboxes. Everyone counted down to press play, and then… It’s a GIRL!